We have a new name and a story to better reflect our heritage and our plans for the future. Please visit our new website www.guildhawk.com
Home Staff Alexander Thomas 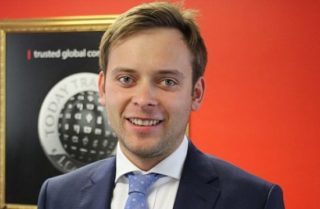 Alexander Thomas, a Postgraduate from University College, Durham University, (UK) where he obtained a distinction both for his dissertation and for his Master of Arts degree. He has worked for several international energy think tanks specializing in the energy security. Currently Alexander works in the financial sector, manages a London based organization and is a member of the Energy Institute in London.

He has carried out extensive research on the Energy Security implications to Croatia of the South Stream pipeline – which focused on the EU’s diversification of natural gas routes and resources; and the Geopolitics of the East Mediterranean gas upstream and its impact on the European Union energy security. The second detailed research piece was supported by BP and used by The Economist, the Durham Energy Institute and the European Commission.

He has also written about the development of the Southern Gas Corridor and the selection of TAP to transit the Shah Deniz gas to Europe, the challenges with the Trans Anatolian Pipeline (TANAP) and the South Caucasus Pipeline (SCP).